5 Things You Didn’t Know About the Savannah Port

One of the largest international shipping ports on the entire east coast, the Port of Savannah receives ocean going vessels from all over the world on a daily basis. Bonded Service runs container drayage services from this busy port to our warehouse facilities in Atlanta, allowing you to receive international orders without ever visiting the coast. Because we run between our two locations on a constant basis, we have become very familiar with the Savannah Port, and want to share some lesser known facts about this fascinating place with you.

The fourth busiest port in the whole country, the Port of Savannah actually leads the pack when it comes to single container shipping. The port’s Garden City Terminal is connected to two railroad lines and has nine deepwater berths that allow for fast and easy loading, unloading and transportation of single containers.

The Savannah Port is Not Actually on the Coast

Located on the Savannah River, the Port of Savannah is almost 20 miles upstream from the Atlantic Ocean. This actually allows for more efficient shipping as the protected waters of the port are calmer than the open sea and provide more coastal area from which to load and unload cargo.

The Savannah Port Moves a lot of Chicken

Because it boasts the highest refrigerated container capacity of any port on the East Coast, the Port of Savannah handles around 40 percent of the entire packaged poultry exports from the United States.

The Savannah Port Creates over a Quarter Million Jobs

According to a recent article in Business in Savannah, the port is one of the largest employers in the state. The Port of Savannah creates 350,000 jobs and does over $66 billion in sales every year, which also contributes significantly to Georgia’s economy.

Furniture is the Ports Biggest Import 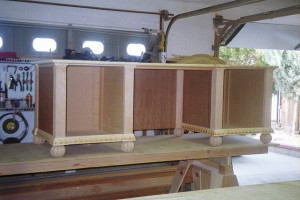 Major furniture retailers like IKEA and Pier 1 Imports have giant warehouses at or near the Port of Savannah for a reason. The port’s largest import every year is home furnishings, followed by other retail goods like electronics and appliances.

If you are interested in using the Port of Savannah for your importing or exporting needs, also check out our transportation and warehousing services at the port. We can help you with all aspects of your international shipping and even specialize in inventory management. For more information on our services contact Bonded Services today at (404) 349-1466.

Posted in Transportation, Warehouse | No Comments »

Fill out my online form.

Bonded Service’s extensive industry expertise has allowed us to be the regional leader in the industries we serve. In many industries, we are the only regional player with both the hard assets & deep experience to address your company’s warehousing service needs.

Subscribe to our email newsletter to receive updates, information, and exclusive offers from Bonded Service Warehouse.